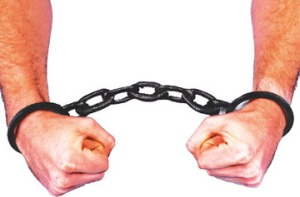 With his newly acquired sword, David made his way south over the sandy terrain and away from Saul. But one day, he woke to find he was surrounded by guards from Gath. They recognized him as an Israelite, took his sword, shackled him, and brought him to their king, Achish. But when they arrived, the king was busy, so the guards had David wait.

He had kept his mouth shut. Now he sat outside the king’s courtyard and hoped he could explain that he was on the run. He picked up the guards’ hushed conversation. The man with the beaky nose who held David’s sword hissed to his comrade, “Grenith, I knew he was trouble when we found him. I’m certain it’s him.”

The other guard ran his rough knuckles through his coarse, black beard. “Alkor, listen, he’s been traveling for days. We’ll have our lord decide whether or not he is David, son of Jesse.”

“It must be him. He carries the sword of our champion.”

David took in a sharp breath. He clenched his fists. Goliath’s sword! How could I be so foolish? He was from Gath. He glanced to the massive sword. Something tells me they won’t forgive me when I come wearing the weapon of their fallen hero. I’ve got to get out of here.

He noticed the guards had turned their backs on him. He slowly planted his hands in the gritty soil to jump to his feet and run. I’ll find a way to get these restraints off once I’ve escaped. But in that moment, more guards arrived and filed him into the next room. It was time to meet the king of Gath.

The throne room reeked of musky incense. The king sat and eyed the tattered, dirty warrior. He sighed. “Alkor, what is this man doing here? I have no need for vagabonds.”

The guard removed David’s shackles and shoved him to his knees. While bowing, the guard brought the sword up. “He is no vagabond, my lord. Here is the sword of Goliath, our champion. He was killed none other by David, son of Jesse!”

The king’s brow lowered. “You don’t mean to say….”

Alkor straightened. “Yes, is it not him, the one Samuel anointed king of Israel? Isn’t he the one they sing about? ‘Saul has slain his thousands, and David his tens of thousands.’ Those ‘tens of thousands’ were our people!”

Achish rose. His ornamental necklace and bracelets rattled. The sound filled the tense air. He made his way toward David. The king’s face grew red as the gemstones around his neck. “Is it true? Are you David, son of Jesse? Hated enemy of Gath?”

David opened his mouth. I sure hope this works.

“Rah tee maaaah, see baba.” David proceeded to run around the courtyard, babbling incoherently, scratching marks on the doors, and drooling like a dog. The king was appalled. “Alkor! He’s insane! Why did you bring him here? We already have enough madmen in this place! Get rid of him!”

Alkor was as horrified as the king. He and the guards ushered David out of the king’s dwelling place and rudely shoved him outside the city limits.

Once they were gone, David smiled and ran east. I may have lost my sword, but at least I escaped with my life!

Later he rested and penned the words, “The righteous person may have many troubles, but the LORD delivers him from them all.”