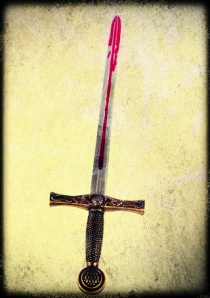 While David ran from the king, many men without direction began following him.

Unfortunately, Saul heard of this new development as well. The king sat under a tree with spear in hand. He gripped the worn handle. The king longed to drive the blade into David’s heart. He shouted to his officers.

“Have you heard? That treacherous dog, David, is gathering men against me! Also, no one told me he met with my son before he fled. Jonathan, my own son! I’m sure he was encouraging this traitor to end my life!”

His officers shuffled nervously. The king was getting into one of his moods.

Behind a few of his soldiers, a shaggy man listened, then stepped forward. It was Doeg. “My lord,” he began. “I saw the son of Jesse up at Nob. He was speaking to the priest, Ahimelech. He gave the fugitive food and a weapon.”

Saul’s face grew flushed and his jaw clenched in anger. “Has everyone in Israel betrayed me?” He called all the priests of Nob to come and they arrived quickly. Eighty-five priests stood in the sweltering sun before Saul. He still sat under the tree. His voice boomed in the silence.

“Listen to me, Ahimelech!”

The priest’s forehead grew moist with sweat. “What is it, my king?”

“Why have you conspired against me? Why have you helped my enemy, David? He was with you! Remember? You gave him food and a weapon! You also encouraged him to kill me!”

The line of priests looked to each other fearfully. Ahimelech tried to hide his shock and fury. His skin grew hot and felt prickly under the desert heat. “My king! I did give the son of Jesse food and a weapon, but I never told him to betray you!”

Saul merely curled a lip in disgust. “I don’t believe you.”

The priest’s anger burned like the hot sun. “Listen, there isn’t anyone in your household as faithful as your son-in-law, David. He is the captain of your bodyguard! Why pursue him unjustly?”

The king heard enough. He leapt to his feet, grabbed his spear, and charged at Ahimelech. The priests pulled back and a few looked away. Ahimelech looked straight into the crazed eyes of king and knew he was not going to win this argument. He slowly dropped to his knees and murmured.

“My lord, please do not accuse us. I had no idea what David was doing.”

His knees stung in the gritty dirt, and Ahimelech slowly looked up, praying to see mercy in the king’s eyes.

Saul hissed. “You will die, Ahimelech. You and your family!” He caught the defenseless man by the throat and called to his men. “Kill them all! They have betrayed me!”

The priests cried out and grouped together. Ahimelech choked a cry for mercy. The officers refused to hurt them. Saul pushed Ahimelech to his back and cursed. “Have all of my men betrayed me?” He looked to Doeg and growled. “You do it. Finish them.”

The Edomite turned on the prone man. The priest recognized him. “You…you were at the temple.” Doeg ignored him and drove his blade into Ahimelech’s chest.

Doeg killed the eighty-five priests. The sand was stained red with their blood.

If that wasn’t enough, he then went to the town of Nob and slaughtered all the families of the priests. Every wife. Every son. Every daughter. Every infant. They were all killed.

Except one. A son of Ahimelech escaped and started looking for David.